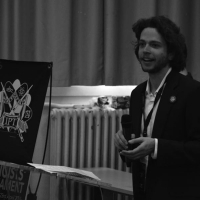 The International Physicists' Tournament (IPT – www.iptnet.info) is a student competition in which teams of four to six students gather to report, oppose and review problems they have prepared over the previous year. Students are asked not only to tackle open questions in research-like investigations, but also to develop debating skills to present, defend and criticize their work against fellow young scientists, who are often even more eager to engage in arguments than their own teachers.

The 8th edition of the IPT took place in France in 2016 and welcomed 17 teams. During its closing ceremony, Michel Spiro, head of the French Physics Society, suggested that the hard work produced by students to prepare their reports could be turned into scientific publications, rather than discarded as soon as the tournament was over. As a member of the IPT committee, I had discussed this hypothetical idea with my colleagues for several years; but Michel Spiro's proposal gave it the necessary kick to get the ball rolling. With his support, and the expertise of EDP Sciences, we decided to take the plunge and create a journal to offer a publishing experience not only to IPT participants, but to any student interested in trying the peer-review process.

Following this founding act, we started brain-storming. Within months, we came up with a journal name, an editorial line and a better vision of what we wanted to do. Our motto was essentially: “let us make sure we would be proud if our own students were to produce any of the articles published in the journal”. For many of us, it was also an opportunity to discover the publishing world from behind the scene – Emergent Scientist (Em. Sci.) is not only a training course in scientific reading and writing, but also in reviewing and editing.

The IPT 2016 has been the cradle of Emergent Scientist, and logically provided the material for its first volume, which you are about to read. We received almost 20 manuscripts, and it has taken some time to tailor appropriate assessment criteria for reviews, write didactic reports to guide authors through revisions, and prepare the structure of the journal. In the name of the whole editorial board, I want to thank especially the IPT participants for their enthusiastic support and patience.

A year has passed since we began preparing this first volume. Today, we are not only releasing solutions to the exciting problems of the IPT, we are starting a new way to bring the whole publication process – reading, writing and reviewing – straight to young scientists. A second volume, dedicated to the IPT 2017, is on its way and the first generic physics issue, open to any submission, will be open soon.

Spread the word! Tell your friends and colleagues, tell your students and teachers: Emergent Scientist is meant for you to use it, and we are going to need your support and input to make the best out of it.

This is an Open Access article distributed under the terms of the Creative Commons Attribution License (http://creativecommons.org/licenses/by/4.0), which permits unrestricted use, distribution, and reproduction in any medium, provided the original work is properly cited.

Data correspond to usage on the plateform after 2015. The current usage metrics is available 48-96 hours after online publication and is updated daily on week days.

Initial download of the metrics may take a while.